A fine building by one of Scotland’s pre-eminent Victorian architects.

St. Michael and All Saints’ Episcopal Church is an early work by one of Scotland’s most eminent Victorian architects Robert Rowand Anderson. He is probably most famous for the National Portrait Gallery (Queen Street) and the McEwan Hall (Bristo Square), both in Edinburgh. All Saints’ is one of his earliest churches, but he went onto design many others including The Catholic Apostolic Church (now The Mansfield Traquair Centre) in Edinburgh and Govan Old in Glasgow.

All Saints’ is unusual in that the congregation returned to the same architect for all subsequent alterations and additions to the church and its related buildings creating a unified group of buildings. Only the church itself is still owned by the congregation but the group of church, parsonage, convent, school and hall is a testament to the architectural skill of Anderson and the faith and zeal of the Episcopal church’s mission to the Tollcross area.

N.B. the building we occupy presently started life as All Saints’ Church, before the merger with St Michael’s Church (Hill Square) in 1965. See here for further details. 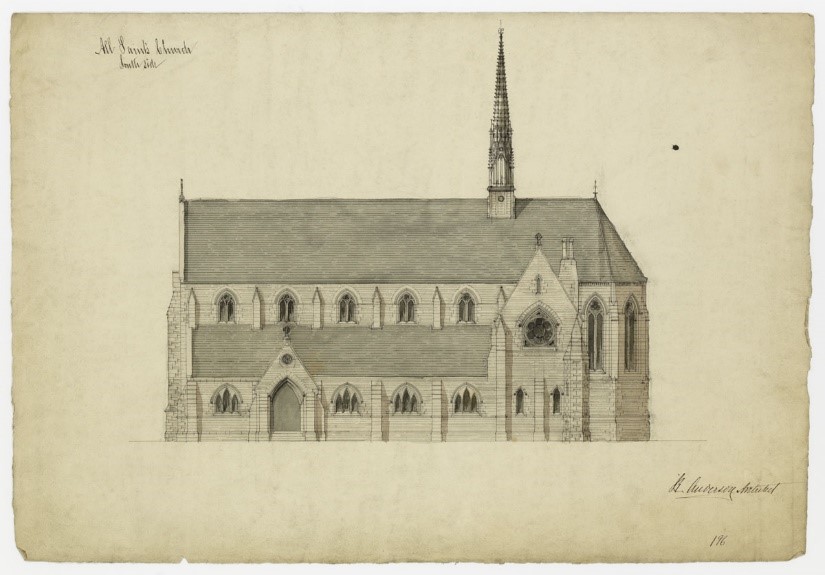 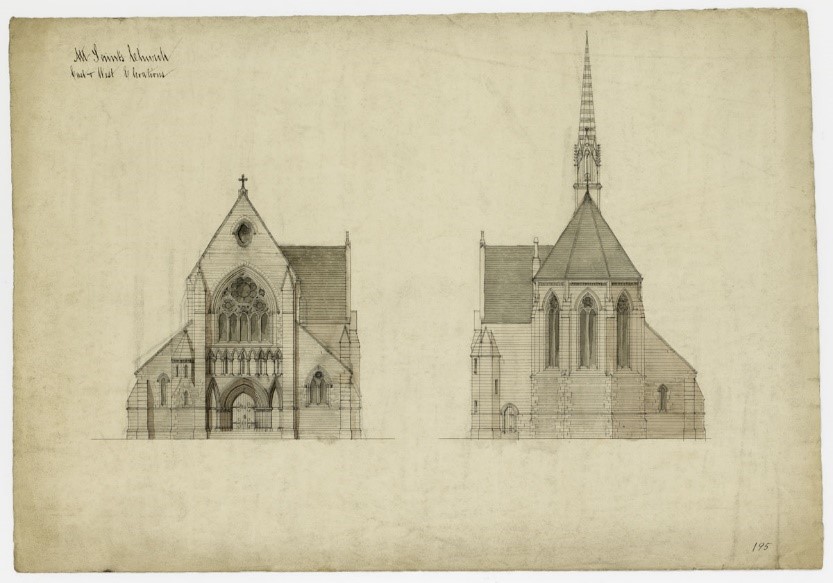 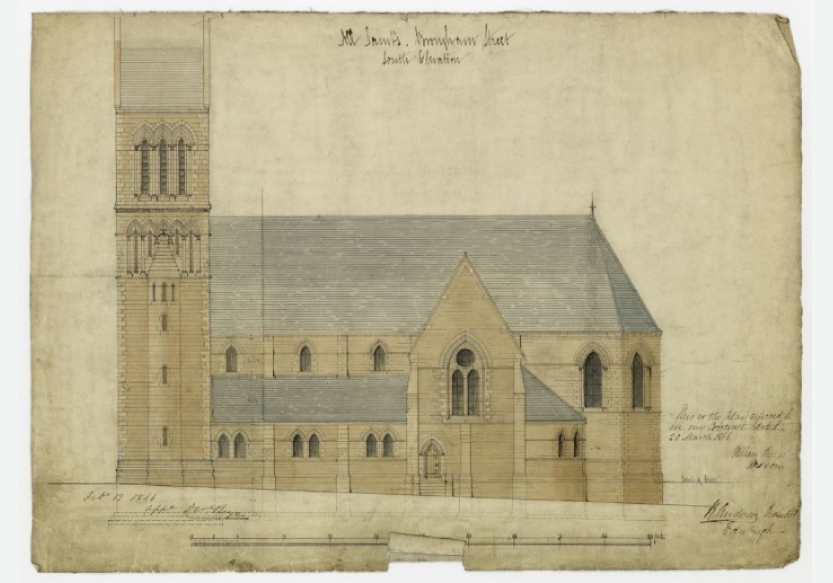 1864: Robert Rowand Anderson invited to enter a limited competition for the design of a new church. William Hay and William L Moffatt were the other invited competitors

1864 3rd June: Dean Ramsay and the Building Committee announced that Mr Anderson was the chosen architect. The new church was to seat 600 and to cost about £4,000

The first proposal was too expensive and possibly drawn before the final site had been identified since it would have been too big for the site on Brougham Street. French Gothic was the style chosen and the most dramatic feature the tall flèche. The grand west entrance and the south aisle entrance are the principal differences. The earliest surviving scheme for All Saints’Church can be seen in the left and middle images above.

The church as built adapted this plan omitting the tower and narthex at the west end and the ‘lady chapel’ to the north of the chancel. The vestry was accessible from the west end of the north aisle. The nave was of three bays with a crossing without the wall shown on the plan. At this stage it was intended to build the west end to this design so a temporary wall was built.

The church was intended to be filled with pews with no side chapels. The new church opened on 20 June 1867 dedicated to All Saints with seating capacity for 450.

Anderson designed the all the original fixtures including the font and the pulpit.

1870: William Burges designed The Dossal for the high altar depicting the Annunciation flanked by Moses and Gideon. It was modelled by Thomas Nicholls and coloured and gilt by Charles Campbell of Harland and Fisher. How this commission came about is yet to be discovered.

Robert Rowand Anderson was the architect for all the further additions and alterations to the church and its related buildings in the 19th century. 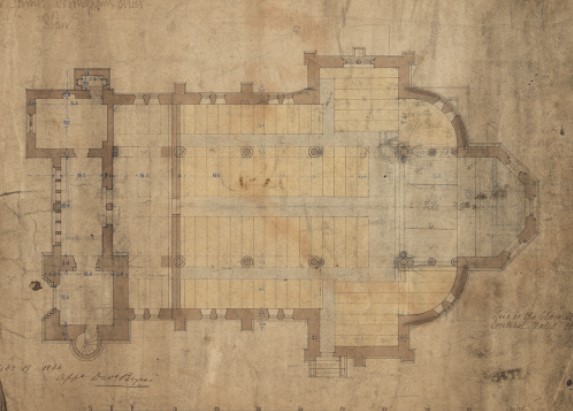 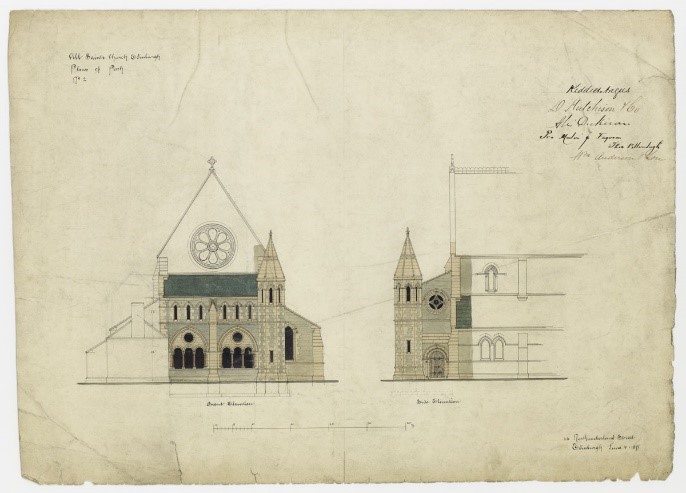 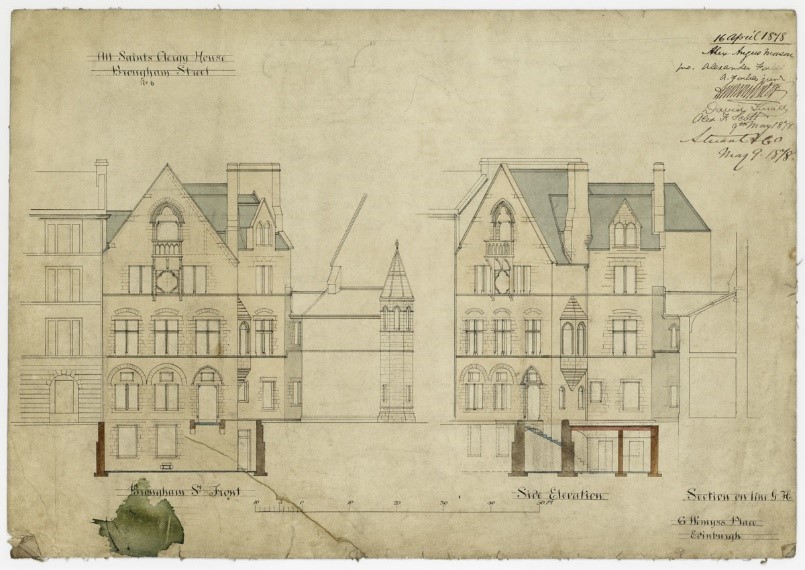 1874: The foundation stone of the ‘Home for Sisters of Charity’ was laid in Glen Street.

1876: The west end was completed to an adapted design. The Rose window of the west elevation was retained. The narthex and gallery over, was built following the original design but the large tower was replaced by a more modest stair and bell tower.  The choir vestry was added later over the earlier vestry. See the drawing above middle.

1877: The foundation stone was laid of the School and Hall adjacent to home of the Sisters of Charity behind the church in Glen Street. The school was on the ground floor with the hall above able to seat 500-600 people ‘to meet the growing needs of the neighbourhood,’

1878: New Clergy House or Rectory was built linked to the Vestry and narthex the choir vestry was probably added at this time. The Former Rectory is now Cloisters Bar. The drawing here shows the proposed elevations of the Rectory very much as built.

1888: Plans for completion of the Lady Chapel were produced but these were not realised until 1897 Anderson chose a Romanesque style for these additions which was a deliberate decision to show that the church had developed over time. He created an organ loft over the chapel, a boiler room beneath and the sacristy and flower porch to the north. The elevations and sections show the works with a space left for the organ that was installed later.

This was the last major addition to the church and completed Robert Rowand Anderson’s work at All Saints’.

1889: Reredos installed at the high altar by C E Kempe c.1900 with figures from Oberammergau.

The original William Burges designed dossal is now in the Lady Chapel.

Images below left and middle show the Chancel as it looked from 1889-c.1965 before the union with St Michael’s. The left photograph shows the original pulpit on the pillar between the chancel and the Lady Chapel, the wrought iron screen and the choir stalls in the chancel. 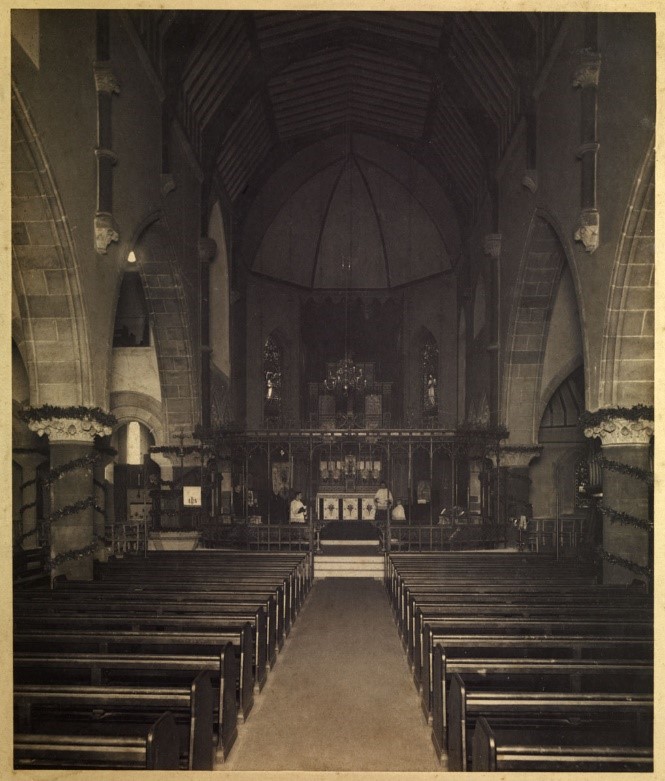 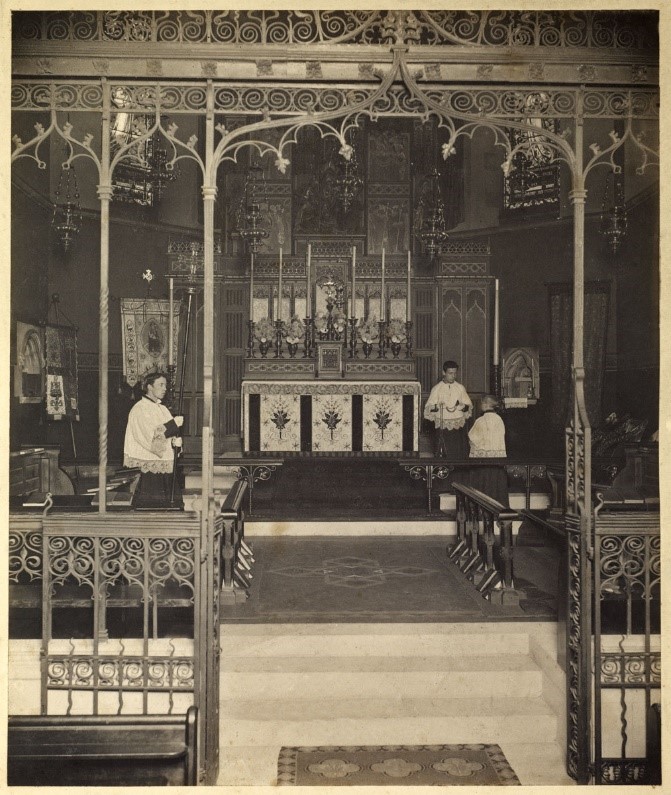 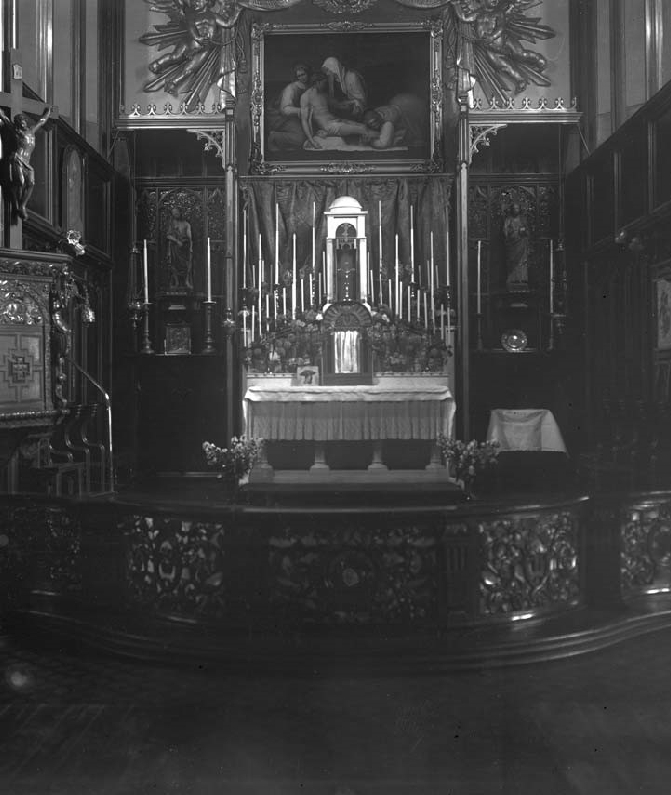 The church in Hill Square was built as the Roxburgh Free Church in 1847 to the designs of Thomas Hamilton. In 1888 John Kinross converted the free church into an episcopal church. The original galleries were retained with the Presbyterian central pulpit being replaced by the altar with flanking chapels beneath the galleries either side. The photograph above right shows the altar, the pulpit, the deposition of Christ painting and a glimpse of the Michael Altar to the right which are now all in St Michael and All Saints’, Brougham Street.

With thanks to Simon Green for his contributions to this page.

This website uses cookies to improve your experience while you navigate through the website. Out of these cookies, the cookies that are categorized as necessary are stored on your browser as they are essential for the working of basic functionalities of the website. We also use third-party cookies that help us analyze and understand how you use this website. These cookies will be stored in your browser only with your consent. You also have the option to opt-out of these cookies. But opting out of some of these cookies may have an effect on your browsing experience.
Necessary Always Enabled
Necessary cookies are absolutely essential for the website to function properly. This category only includes cookies that ensures basic functionalities and security features of the website. These cookies do not store any personal information.
Non-necessary
Any cookies that may not be particularly necessary for the website to function and is used specifically to collect user personal data via analytics, ads, other embedded contents are termed as non-necessary cookies. It is mandatory to procure user consent prior to running these cookies on your website.
SAVE & ACCEPT